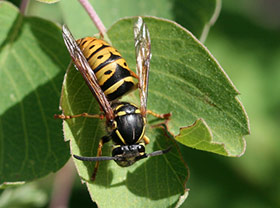 Where to find it while inspecting: These species of yellowjacket wasps and hornet (baldfaced hornet is actually a wasp) are aerial nesters. Begin in early spring to watch for wasp activity and follow them if possible. Look up into trees and open-sided structures such as bleachers. Often a nest is not visible until leaves fall, but warrants a search before incidents occur. 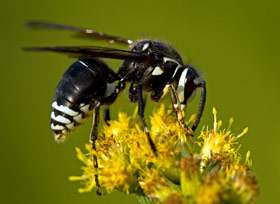 Life Cycle: Mated females build new nests in spring, lay the first batch of eggs and raise them into adults. This first brood are all female workers and will takeover all work and raising of young. The queen will continue to lay eggs throughout the summer. Late season young mature into new queens and males. Once raising of young is complete, workers and mating adults become active outside the next until they die before winter; only mated females overwinter.

Preferred Food Sources: Adults eat nectar (sugars) but hunt throughout the season for protein sources to feed young. This is most often the larvae of other insects such as soft-bodied caterpillars. As the colony grows, demand grows and you will see many more workers around your own food and garbage containers.

Preferred Habitat: Baldfaced hornets and European hornets: Lesser-disturbed areas such as trees away from buildings, woodlots, structures that don’t have every day activity. (Baldfaced hornets prefer the branches of trees, European hornets seem to prefer to build inside hollow trees.) Aerial yellowjackets are not as fussy and will build in voids as well as trees in closer proximity to human activity. 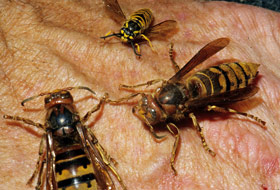 Threshold: Indoors—one wasp demands action due to risk for allergic reaction: 1) try to determine how it got inside. Easily through door or window? or from an inside wall. 2) keep calm and don’t spray! Outdoors—thresholds are VERY subjective. Action is only necessary if a ground nest is determined to be within twenty feet of any activity area that does not include use of food. If a nest is known to be anywhere near an outdoor eating area or concession stand you may want to act. NOTE: thresholds vary by time of year, species, and the expectation of disturbance. Foraging wasps may travel up to 3/4 mile (German yellowjacket) so focus on watching for nest activity (busy wasps coming and going from one spot). If you see wasps frequenting a trash can at the rate of ten or more in a ten minute period, you need to act. Wasps are happy to avoid human contact unless you disturb their nest or they perceive a threat while on a food source.

Best Management Practices: IPM for wasps includes: inspection, correct ID, monitoring, exclusion, sanitation. First, learn to monitor for new nests before spring and throughout the season. Second, reduce possibility of nesting by sealing entry to wall voids, and removing deadwood BEFORE, not after you have discovered a nest. Third, during spring and early summer, mow with more frequency along edges of lawns, fences and typically unused parts of the campus to make these sites less desirable to queens. Seal open pipes and poles with the new replacements for steel wool (rustproof mesh) and, in some cases, expanding foam, to block entry ways to larger voids underground. NOTE: mowing or use of string trimmers will often agitate nests yet to be discovered, so start early in the season. Most stings result from unintentional contact with nests.

Treatment Methods: Exclusion: seal any possible entry site into walls and structures. Check carefully in soil along foundations, fence-lines, and edges of mowed lawn where old posts have been removed or rodent holes may occur—fill them in and compact BEFORE SPRING. Wash down any outdoor tables, trash cans, dumpsters with soapy water frequently in late summer, early fall. If wasps are foraging from an off-site nest and visiting a busy area, you may want to use food-bait traps on poles in an adjacent area to lure away from an activity area. NOTE: you must not have food source available in an area you want to keep wasps from—only at the baited area. See more in our form: TRAPPING STINGING INSECTS. Nest removal is best left to a professional, but establish a protocol before they are needed. In a case where a nest site can’t be ignored—often when nest is in a wall void, or too close to an activity area. Removal procedures generally include vacuuming and may include an insecticidal dust, but is governed by the pesticide use laws in your district and state.

Was the tactic successful? Record the date pests were first noted, and the tactic you used, and its success. Use one of our recordkeeping tools.