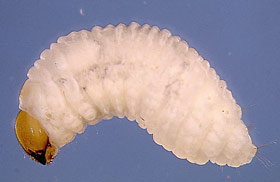 Confirm the presence of billbugs before you treat.

Where to find it while inspecting: In springtime, billbugs move from leaf litter near turf into the turf and may be seen as adults walking over turf to the spots where they decide to lay eggs. In summer spotty browning of turf will be an indicator. Look for frass (excrement) that looks like whitish sawdust in the turf. They are primarily a pest of bluegrass, so you are less likely to see this species on fescue or ryegrass fields.

Size and Appearance: Billbug larvae (grubs) look like other white grubs but do not have legs. Small, creamy white, slightly curved bodies with brown heads; up to 1/2" long when fully developed. Adults are small black weevils (long snouts) about 1/3" long. 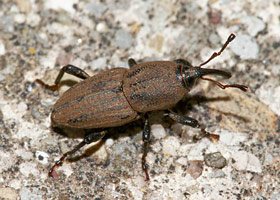 What is the life cycle of billbugs?

Life Cycle: Billbugs overwinter as adults buried in leaf litter and then begin the walk to suitable turf on sunny May or June days. Adult females lay eggs in June, in turf, and the larvae hatch and feed within the turf stem. As they grow the feed closer to the grass plant’s crown, and then go to the roots. Larvae pupate in the soil in late August to hatch in September and October.

How many billbugs are too many?

Threshold: If you see more than two adults per minute on bluegrass or bluegrass mix turf in May or June, you will likely have turf damage. Scouting with the use of a soapy water flush is a very good way to determine population.

Creating a healthy soil condition and understanding turfgrass’s needs is the first step in reducing turf pests. What can I do to treat, reduce, or prevent billbugs?

Best Management Practices: Switching over your bluegrass mixed turf by overseeding with other varieties will reduce the incidence of this insect. The use of endophytic grasses (specially hybridized grasses containing endophytic fungus) makes grasses less palatable to a variety of turfgrass pests. So far there is no endophytic bluegrass varieties. Growing healthy turf is the best way to reduce billbug damage—do not over irrigate or overfertilize turf.

Treatment Methods: Entomopathogenic nematodes (microscopic soil “worms” that attack insect larvae) can be applied through irrigation and should show reduction in turf damage. Steinernema carpocapsae attacks billbug larvae but care must be taken to ensure the soil is kept moist before, during and after application, so they do not dry out before establishing in the soil. Best time to apply for billbugs is late June or early July when new billbug larvae are hatching. In some cases, insecticides are used but care must be taken to choose the proper mix and apply at the right time.

Was the tactic successful? Record the date pests were first noted, and the tactic you used, and its success. Use one of our recordkeeping tools.