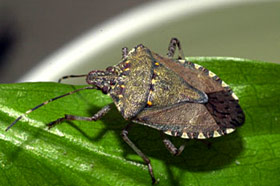 Where to find it while inspecting: Indoors, stink bugs will emerge from cracks under or behind baseboards, around window and door trim, and around exhaust fans or lights in ceiling; you won’t have to look for them, they may come to you. They prefer to overwinter indoors, so you may see them year round. Outdoors, BMSB is a pest of many vegetables and fruits.

Life Cycle: Adults overwinter and generally become active in April, mating and laying clusters of 20–30 eggs on the undersides of leaves from May through August. Eggs hatch in 4–5 days after deposit. Nymphs go through 5 instars. Generally one generation per year.

Preferred Food Sources: Many ornamental plants and trees. Adults prefer fruits while nymphs feed on leaves, stems and fruits. BMSB is becoming a major pest problem with fruit growers throughout the U.S.

Preferred Habitat: As a structural pest, they are often found in large groups in the fall as they prepare for protective habitat for winter, and without proper exclusion, they find their way in to wall voids around windows and doors, outlets, light fixtures, etc. A favorite entry is the small gaps around window air conditioners.

Threshold: Finding more than one or two probably means there’s a need to check for entry and improve exclusion. A very large number could be gathering in areas such as crawl spaces, wall voids, above false ceilings. They prefer the sunny side of a building.

Best Management Practices: Prevention by exclusion is key. Once an entry is found, it will be used. BMSB is attracted to lights and often will take advantage of nearby gaps you will never see without examination. If they have entered a room, isolate the room as much as possible. NOTE: Vacuuming live or dead bugs is a solution to removal but has a risk of contaminating the vacuum hose with a noxious odor! When very large numbers are gathered in the surrounding landscape, treatment options may include pesticide applications around the perimeter, particularly eaves, soffits, roof vents, flashing, chimneys, and around doors and windows. However, this is an extreme measure and must be made with much detail to safety and concern for air quality and exposure risk.

Treatment Methods: In some cases, the use of a trap light employing a glue board will reduce numbers. NOTE: heat from the light unit may increase the odor when these insects release scent under stress. The best treatment is prevention. Prepare for possible problems before the fall.