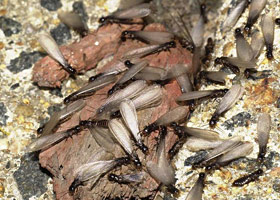 Where to find it while inspecting: In structural wood (more likely close to soil)—sills, studs, joists, subflooring, posts, steps, frames—and also in fallen trees and stumps. Look for cast off wings, long hollowed out passageways in wood, mud like tubes attached to wood (don’t confuse with mud dauber wasp). Termites prefer areas near heat sources: furnaces, boiler, chimneys, water heaters and hot water pipes. Termite activity is often overlooked until damage or confirmed sightings of winged termites points to a colony nearby. NOTE: learn how to properly identify ants as well as termites—they are most often confused. Confirmation of infestation usually calls for a professional.

Size and Particulars: Eggs and young are found in nurseries similar to an ant colony. There are three (castes) types of termites by species: The white wingless, non-fertile, soft-bodied workers, .25" (they do the wood damage and are the majority of the colony); the non-fertile, wingless soldiers, .25", who defend it with their enlarged heads and jaws; and the reproductives: queens and late season fertile males which are the only ones who complete the cycle to full adult 3/8–1/2". (All others are repressed by the adults’ pheromones.) 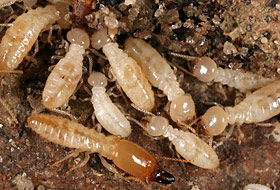 Life Cycle: Fall queens and males mate in soil in late fall to start new colonies. Workers hatch first and begin to build the colony and raise new young. Workers also feed the soldiers who are unable to feed themselves. Queens continue to lay eggs. New queens and new males are raised again in fall to enlarge the colony or begin new ones but queens have multi-year life expectancy.

Preferred Habitat: Termite diet is cellulose fiber, aka wood, so their habitat must include wood or paper. Termites are also moisture and temperature sensitive so their preferred habitat is at ground level, in wood, and protected by heated structures. In these circumstances, colonies may thrive.

Threshold: Zero. Once you find them, they are very likely well established.

Best Management Practices: Termites can be deterred by reducing attractive habitat—this means 1) reducing moisture sources near the wood, and 2) placing non-wood borders between wood and soil. Keep the soil dry near the foundation by encouraging ventilation and drainage, caulk openings in wood and cement both; keep lumber, wood debris away from buildings as well as trees and shrubs well away from foundation. Inspect closely if you have any reason to suspect termite activity.

Treatment Methods: When an infestation has been found, try to replace damaged wood and incorporate all the prevention strategies. Various insecticidal treatments are available, and due to the risk of more damage, may have to be considered. Insecticidal treatments include applications to soil, replacement with treated wood, bait traps which allow termites to return to the colony with slow acting insecticides, and use of insecticides applied directly to wood as a barrier. Like any insecticide, it is imperative to use safely and legally.