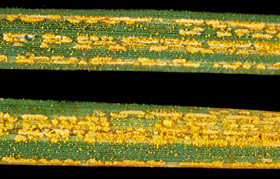 Confirm the presence of rust before you treat.

Where to find it while inspecting: On turf blade. Will begin as light green or yellowing areas and then appear as brown or orange blades in grass that has been subjected to favorable conditions for fungal growth. Active rust disease also shows up by reddish “dust” on shoes and tires. Can be found on Kentucky bluegrass, perennial ryegrass, fescues and zoysiagrass.

Is it a rust disease? 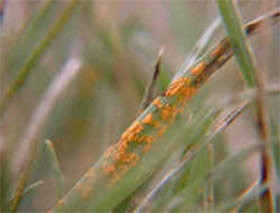 What is the life cycle of rust disease?

Life Cycle: Rusts survive in soil and plant material and become active in specific weather conditions. Cool to warm, moist weather favors infections and leaf wetness is needed to spread infection. Even one day of long-term dew on leaves can facilitate infection. Most turf rust diseases need a host plant to complete their life cycle (each disease has a list of favored herbaceous or woody plants that work for this part of the life cycle). Rust starts as flecks that enlarge into ruptures on the blade surface (pustules). Pustules contain orange spores that spread easily.

Preferred Habitat: Turf with neighboring plants that act as hosts (varies by disease).

How much rust is too much?

Threshold: This depends on vigor of turfgrass plants affected and weather conditions that slow or extend damage. Turfgrass rust often goes untreated on most school grounds.

Treatment Methods: Where allowed, fungicides may be appropriate in some instances.