Nosema maddoxi microsporidian has been found to prefer the invasive pest

In 1978, Joseph Maddox, insect pathologist at the Illinois Natural History Survey, reported finding an insect pathogen in the green stink bug (Chinavia hilaris) throughout the Midwest (Maddox, 1979). It was a microsporidian species that was ultimately described in 2017 and, in deference to its discoverer, named Nosema maddoxi (Hajek et al., 2017).

This microsporidian was found in several stink bug species, including the brown marmorated stink bug (BMSB, Halyomorpha halys (Stål)), an invasive species posing a significant threat to agriculture throughout the United States.

Very little is known about this pathogen, so research has been underway to determine its effects on BMSB and whether it could be an additional tool for biological control.

Biological control—or biocontrol—is the use of a living organism to control the populations of other organisms that are considered pests. It’s a potent tool in the integrated pest management arsenal, offering an alternative to pesticides by capitalizing on the control agent’s natural behavior.

The Brown Marmorated Stink Bug: What Is It and Why Does It Matter?

The brown marmorated stink bug (BMSB, Halyomorpha halys (Stål)), is an invasive insect that was unintentionally brought over from Asia in the late 1990s. BMSB is a voracious eater that damages fruit, vegetable, and nut crops, posing significant risk of widespread agricultural and economic harm.

With an abundance of food sources and few natural predators in North America, BMSB has spread quickly and effortlessly, creating a critical need for the development and dissemination of effective management practices—preferably least-risk practices, especially given the pest’s broad geographic footprint and its affinity for food crops.

Biological control of BMSB is one area of active research. By identifying and capitalizing on natural predatory or parasitic dynamics, scientists are exploring promising leads that may ultimately help minimize the pest’s impact.

What Are Microsporidia and How Do They Spread?

Fungal Pathogens and the Hosts They Depend On

Microsporidia are microscopic obligate pathogens—organisms that cannot complete their life cycle without a host—living inside a host’s cells (Boucias and Pendland, 1998; Becnel and Andreadis, 2014). Many species are pathogens of fish and invertebrates, including insects (Han and Weiss, 2017).

Spores can survive outside of a host for a short period of time, but the asexual stage occurs only in the cytoplasm of a host tissue cell (Hoch and Solter, 2017).

Microsporidian infections in invertebrates—including stink bugs—occur when microsporidia cells and spores are present within the cells of a susceptible host (Onstad et al., 2006). There are two ways for microsporidia to infect new hosts.

In horizontal transmission, spores that have developed in an infected host are orally ingested by a potential host individual (Hoch and Solter, 2017). Once the spores are ingested, the different life stages develop within host cells in the cytoplasm.

Horizontal transmission can occur via feeding when healthy individuals feed on the feces of an infected host, or when they feed on the cadaver of an infected host that has died (Andreadis, 1987). In the lab, BMSB have been observed to feed on eggs, nymphs, eclosing adults, and on cadavers of other BMSBs (Medal et al., 2012), which could make them vulnerable to microsporidia infection. Nymphs and adults can also get infected if their environment is contaminated with spores (Hoch and Solter, 2017). 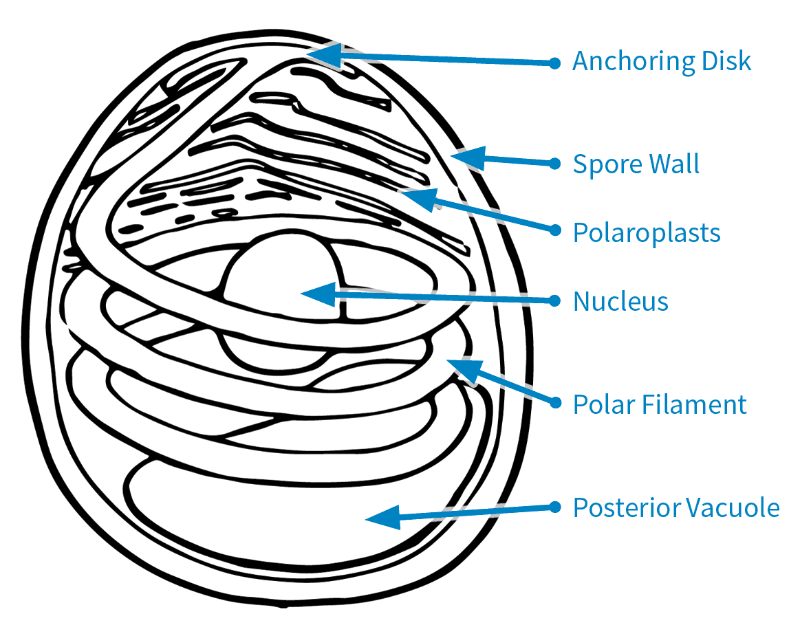 Figure 1. Microsporidian spore based on the original drawing by Naomi Fast (Keeling and Fast, 2002).

Structure of a Spore

There are several parts that make up a microsporidian spore.

The spore wall consists of the endospore and exospore (Keeling and Fast, 2002; Fig. 1). This protects the spores when in the environment outside the host cell.

Inside the spore are the polaroplasts, nucleus, posterior vacuole, anchoring disk, and polar filament (Keeling and Fast, 2002; Fig. 1). Some microsporidian species have two nuclei, but Nosema maddoxi has only one (Hajek et al., 2017).

The polar filament is a coiled, tube-like structure that is crucial for infecting a host, and it is one of the key features distinguishing microsporidia from other pathogens (Keeling and Fast, 2002).

To infect a host, a microsporidian must first get inside a host cell. To do so, the polar filament uncoils while everting—that is, turning inside out—and extending out of the spore to pierce a host cell (Boucias and Pendland, 1998). The spore’s contents are then injected into the host cell’s cytoplasm.

Microsporidia typically target host cells in the midgut, fat body, and reproductive system, but different microsporidian species can differ in this preference (Boucias and Pendland, 1998; Hoch and Solter, 2017).

What Can Microsporidia Do to Insects?

A Wide Array of Pathogens and Their Effects, Both Good and Bad

Of the 200 described microsporidian genera, 93 have insects as hosts (Becnel and Andreadis, 2014). One species is commercially available as a biocontrol agent to control pest populations of rangeland grasshoppers (Ewen and Mukerji, 1980).

But it is only by coincidence that microsporidia sometimes share human priorities, as they can also be problematic for researchers who are mass-rearing insect colonies in laboratories, either for research or for production as food and feed (Stentiford et al., 2016).

Insect colonies can collapse from microsporidian infection, and infected colonies of biocontrol agents can have reduced fitness and suffer diminished effectiveness in the field (Bjørnson and Oi, 2014).

The only method known to clean a colony from microsporidian infection is the Pasteur technique, which was created by Louis Pasteur in the 1870s (Hoch and Solter, 2017). Female and male pairs are isolated from the insect colony. After eggs are produced, the adults are checked for infection. If the adults are infected, the eggs are not used to grow the colony. Otherwise, they are kept to start a new infection-free colony (Becnel and Andreadis, 2014; Bjørnson and Oi, 2014).

What Does the Host Experience?

The negative impacts that microsporidia can have on an insect host (Becnel and Andreadis, 2014) include:

Chronic vs. Acute: It Depends

In most cases, microsporidia infections are chronic, tending not to swiftly prove fatal. Instead, they linger, broadening their opportunity to infect new hosts (Hoch and Solter, 2017).

However, microsporidian infections can increase within an insect population and, depending on the health of new hosts, can become acute and much more deadly (Bjørnson and Oi, 2014). 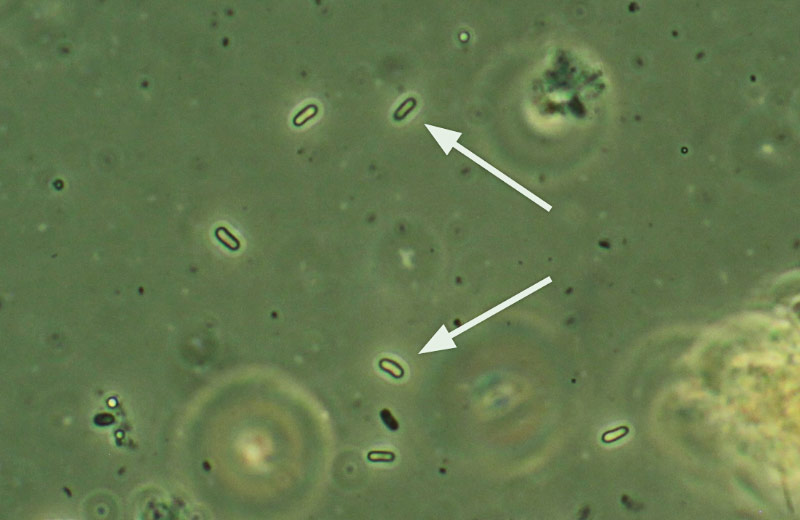 Nosema maddoxi spores under a compound microscope at 400× and phase contrast.

Beginning in 2012, some mass-reared BMSB lab colonies in the United States were found to have collapsed. The perpetrator, it turned out, was Nosema maddoxi, the same microsporidium in the Nosematidae family (Hajek et al., 2017) that Joseph Maddox had first found in the green stink bug over three decades earlier.

In keeping with the norm, this species is known to rely on horizontal transmission for infecting new hosts (Hajek et al., 2017). Given that BMSB adults and nymphs have been observed feeding on spores contaminating their environment as well as on eggs and cadavers, they are vulnerable to this method of infection.

Given the tantalizing prospect of using Nosema maddoxi as a biocontrol agent against BMSB, research on the microsporidian’s effects on the pest is underway.

Field research is being conducted to answer more questions, including: What is the distribution of Nosema maddoxi in BMSB populations in the United States? And what is the prevalence of infections in field-collected BMSB?

Lab studies are focusing on the pathogen’s effects on BMSB survival, female fecundity, and rate of nymphal development.

While early indications are promising, there is much yet to explore and discover. Stay tuned!

Call for Submissions and Photos

Participate in a BMSB Impact Survey

Update to Pesticide Guide that Aims to Reduce Risk to Pollinators